The War Raider Mark II is one of the new ships introduced to the BSGO Universe. This ship was introduced to the game after the launch of Battlestar Galactica: Blood and Chrome, and was originally given to all American based players for free with a code BLOODANDCHROME that aired on TV. Following negotiations between Bigpoint and the SyFy Channel, the ship was given to all European players for free. The code which gave this ship for free no longer works.

The War Raider Mark II can be seen a comfortable middle between the War Raider and the War raider as it sports a delicate balance of slots.

The War Raider Mark II is a multi-role strike ship that is meant to be the pre-cursor to the Cylon Raider.

The War Raider Mark II is pre-installed with the following systems: 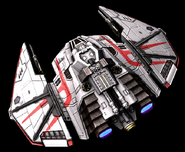 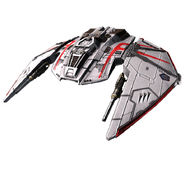 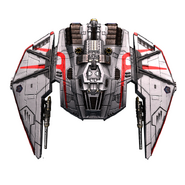 Retrieved from "https://bsgo.fandom.com/wiki/War_Raider_Mark_II?oldid=12406"
Community content is available under CC-BY-SA unless otherwise noted.