The Veil Sector is the sector of space where all the action of Battlestar Galactica Online occurs. With a dense nebula, the Cygnus Nebula, located at the centre of the sector, as of 15 July 2015, the Veil Sector comprises 62 star systems, of which 58 are accessible via the sector map. The remaining 4 systems are special systems which are only accessible during certain events (e.g. tournaments) or via special missions (e.g. interdiction missions). 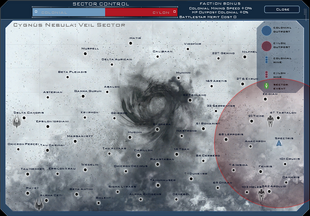 Note about system maps, salvage and debris fields, and freighters:

Star Systems Accessible via other methods

Retrieved from "https://bsgo.fandom.com/wiki/Veil_Sector_Systems?oldid=12387"
Community content is available under CC-BY-SA unless otherwise noted.