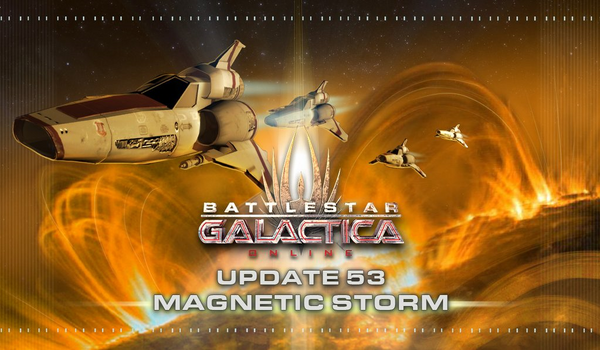 Game Update 53 "Magnetic Storm" has been released on Monday, Dec. 14th at 17:30 CET / 11:30 AM EST. This release features a new tutorial and focuses on comprehensive balancing adjustments. Additionally the winter event “Typhon’s Revenge“ will commence soon after and will run until Wednesday, January 13th. On top of that we want to highlight that the Erlang 18 update reduced the CPU load continuously by 60%. As we have to deal with multiple migrations the the estimated game downtime is 2 hours. Further details about this release below.

Please note: Due to the following balancing changes, the Stealth ship and all related items have been removed from all player accounts with a full refund. This means for every stealth ship system you bought and/or upgraded, you have been compensated with the full buy/upgrade price (the refund is in tylium and tuning kits). Everyone can decide for himself whether to re-purchase the stealth ship or spend the resources on other ships.

Today (December, 16th) at 14:00 CET (08:00 AM EST) we will deploy a hotfix for BSGO Game Update 53. The hotfix will take care of the missing Stealth Ship refunds and will also fix a critical bug with the Daily Assignments where Colonial player got a sector assigned for sector patrol that was actually not accessible.

Retrieved from "https://bsgo.fandom.com/wiki/Update_53?oldid=12368"
Community content is available under CC-BY-SA unless otherwise noted.