The Surtur is the Carrier Capital Class ship for the Cylon faction. The Surtur can be bought for 400,000 Cubits and 90,000 Merits with a minimum level of 40. The ship is constructed in the Carrier Drydock located near the Cylon Base in 47 Tartalon. Carrier ships are mobile respawn points which only dock and respawn at planetary bases. Up to 9 player-owned strike ships in the same squadron as the carrier ship can dock with the carrier to repair, re-supply, and jump within the ship. In addition, carriers can repair and recharge friendly vessels in close proximity.

Game Update 42 saw major changes to carriers. Weapons slots were changed for carriers, with guns, launchers and defensive (i.e. flak and point defence) weapon slots introduced in place of "generic" weapon slots that other ships use. Additionally carriers now have area buffs which can assist all ships within a substantial range of them.

The biggest change is the introduction of a role ability for carriers known as "Outpost mode". When activated the carrier becomes a heavily armoured, unmoveable fortress. When "Outpost Mode" is activated, Carriers also have the ability to serve is FTL Jump beacons for anyone in their faction, with players being able to jump from anywhere on the sector map to the Carrier, even if the carrier is outside their ship's FTL range.

Additionally, there is now an advanced version of the Surtur. Players who already owned a carrier at the time that update 42 was deployed received the advanced carrier for free.

"Discovery of the derelict shipyards near 47 Tartalon has allowed the construction of the Surtur class carrier. The carrier is a support and logistics vessel that allows strike ships to coordinate attacks and quickly repair and refit away from an outpost."

The Sutur is pre-installed with the following systems: 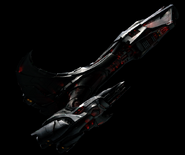 Retrieved from "https://bsgo.fandom.com/wiki/Surtur?oldid=12739"
Community content is available under CC-BY-SA unless otherwise noted.