The Veil Sector is a sector of space where In all the in-game action in Battlestar Galactica Online occurs. There are a multitude of star systems for the pilots to explore, fight and mine in. There are a total of 55 systems, of which 45 of those systems are open to both Colonial and Cylon players. There are some restricted systems that you are restricted to only Colonial or Cylon players, and only players from that faction are allowed to enter those systems. For example if you're a Colonial pilot, you can't jump into 242 Apollid (the Cylon home fleet), whilst Cylon players can't jump into Alpha Ceti (the Colonial home fleet). These restrictions allow new pilots to explore the close system with no chance of being jumped by enemy players.

However, outside these systems, there is a another restrictions. There are another 14 systems (7 each) that the other side cannot create Outposts in and where there are limits on the number of players of the enemy faction that can be in those systems at any one time. All the other systems are fair game and create some cool fleet battles.

The release of Game Update 51 on 13 July 2015 saw the addition of 3 new star systems to the Veil Sector: Carillon, Exomera, and 14 Toah. These new systems are bigger then the other systems in the Veil sector as they are designed on a 40,000 metre x 40,000 metre dimension and not the 10,000 metre x 10,000 metre dimension of the other 52 star systems. Additionally, you will find  platforms, NPCs, debris fields, asteroids and other items in these systems on varying height levels in these system, unlike the other systems where all items are on the same vertical level.

Below is the current sector map Colonial version. 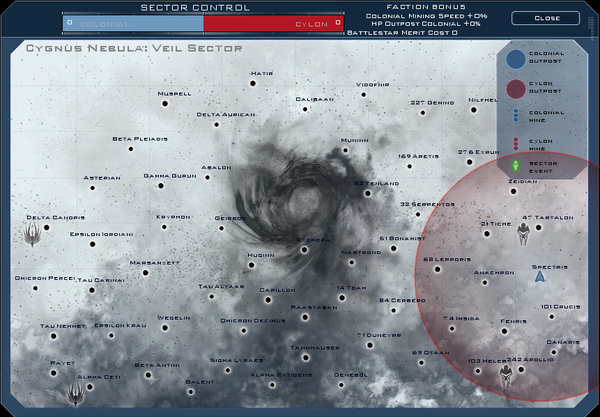 Veil Sector as at December 2015

There are specific systems that are commonly judged as being amongst the best systems:

If you come up with more notable star systems then please add them to the list (and keep them in alphabetical order). For a full list of star systems, click here.

Community content is available under CC-BY-SA unless otherwise noted.