Scavor is a special star system (sometime referred to in-game as the Scavor sector)  that the Kratos's Reunion event took place. This system was not accessible via the system map, but by the Battlespaces tab which is only accessible on the heads up display when Cylon or Colonial players are docked at an Outpost or at the Battlestar Galactica (Colonial players) or Basestar (Cylon players). To leave this system, players would access the Battlespaces tab again, which wouild initiate an FTL jump back to the place theyt were when they jumped to Scavor.

There are no NPC ships in this system, no platforms, no drones, and no cargo contaioners (except those part of the Kratos's Reunion event).

Space station in the Scavor system (as appears from Colonial spawn)

Cylon fleet (as seen from the Colonial spawn point) 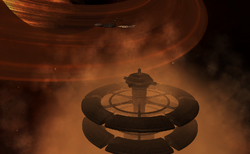 Space station (as seen from the Cylon spawn)

Basestar and Guardian Basestar
Add a photo to this gallery

Players may not pilkoty either the Battlestar Pegasus (Colonials) or the Basestar (Cylons) in this system.

Retrieved from "https://bsgo.fandom.com/wiki/Scavor?oldid=12289"
Community content is available under CC-BY-SA unless otherwise noted.