The Rhino is a  assault strike of the Colonial fleet. The Rhino is the tank of the strikes and is best used for getting escorts and lines attention off of weaker targets. Absorbing damage off of other strikes with ease it can also be equipped to handle any situation. Against strikes it can take on three at the same time but with escorts and lines its best to use a group of strikes as you are a bigger target so their weapons can hit you easier.

However, the Rhino is slow and cumbersome, having little evasion. When upgraded, the Rhino can take 5 weapons, but the 5th weapon added will be facing the back. This prevents enemy players from attacking its blind spot, but it does not increase the Rhino's offensive capabilities.

"An extremely rugged and heavily armored strike craft, only a small number of Rhinos have so far been discovered by the Colonial Fleet, and bringing them back into service requires a significant investment of time and resources. However, their ability to withstand incredible punishment has already made them highly valued.

As an Assault ship, the Rhino can be equipped with more hull systems than other strike craft, further increasing its toughness and defensive capabilities."

The Rhino is pre-installed with these systems: 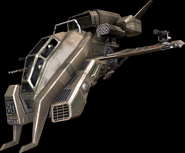 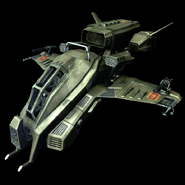 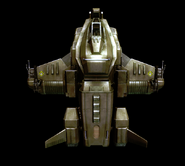 Retrieved from "https://bsgo.fandom.com/wiki/Rhino?oldid=12410"
Community content is available under CC-BY-SA unless otherwise noted.