The Raptor Fleet Reconnaissance or Raptor (FR) for short, is a new variant of the original Raptor. It has the firepower of the basic Raptor, the engine systems of a Viper Mark II and the computer capacity of an Advanced Raptor. Unfortunately, it has only one Armor slot, making it one of the weakest vessels in terms of armor, so it will have to depend on its ability to evade enemy fire or Command consoles. In order to purchase the FR, the player must first have an Advanced Raptor, before they can finally purchase the FR variant, at a cost of 45,000 Cubits. Overall, the player will be spending 75,000 Cubits and 75,000 Tylium just for the FR variant, so it's only a worthwhile investment for those hardcore players who utilize or want to have a Command Strike ship that comes with a little extra speed.

Some of the main advantages of the Raptor (FR) is its impressive FTL range, due to its vastly improved engine capacity. Of all the Strike craft, the Raptor FR can jump the furthest and has a shorter charge time before jumping. It also comes with a greater Dradis range, allowing players to detect targets early on from far away. One of the best uses of a Raptor (FR) is when the player is in a squadron and alone in a sector, using an FTL Transponder Cell, they can bring their entire squadron from anywhere or any other sector to the Raptor's position, enabling a surprise attack after some valuable recon by the same Raptor. The Raptor (FR)'s unique design is such that it will only serve a specific purpose, and allows no margin for error, or the flexibility of changing tactics, so this is a vessel best used by players who are very certain with what they want to do. Thanks to numerous computer slots and larger engine capacity, the FR can almost match the speed of a standard Strike Interceptor, and with Command capabilities they can weaken enemy defenses or boost themselves to make a quick getaway.

It should be noted if you purchase this ship you do not lose access to the Advanced Raptor.

Update 53 saw a new item of Missile Jammer Computer added to the game.

"A specialized variant of the Advanced Raptor, the Fleet Reconnaissance Raptor serves as the primary situational awareness and squadron mobility ship in the Colonial fleet. Chief Tyrol has traded some of the weapon and hull capacity of this Raptor for a marked increase in DRADIS, engine and FTP jump performance.

The Raptor FR2019s engine mounting grants a much broader range of modification, and its navigational systems have been specially adapted to increase the efficiency of FTL transponder systems. Role Bonus: Command - Jump transponder power costs are reduced by 75 when used by this vehicle."

The Raptor FR is pre-installed with these systems:

Raptor FR with Basestar in background 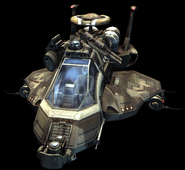 Raptor FR
Add a photo to this gallery

Retrieved from "https://bsgo.fandom.com/wiki/Raptor_Fleet_Recon(FR)?oldid=12348"
Community content is available under CC-BY-SA unless otherwise noted.