Planetoid Mining is rather different from the asteroid mining in multiple ways.

Planetoids are rather like moons but smaller. They are at least 15 times bigger than the biggest asteroid in BSGO and are easy to spot from quite a distance. They are large asteroid shaped rocks from which you can get much more resources from than the common asteroid. 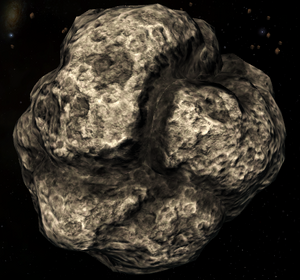 Unlike asteroid mining, scanning them and then blowing them up with cannons, Planetoids are much too large to destroy and get the resources within efficiently. So instead you must cough up 100 cubits for a mining ship. Mining ships have 4,500 health and have no weapons whatsoever. It's up to you to defend them whilst they extract the goodies within the rock. If you leave a mining ship it will eventually be destroyed by NPCs forces or enemy players. While the Mining Ship is extracting the resources will be gained over time an be placed directly into your hold. You will gain resources from it no matter where you are or if you are offline. However if you are going solo it is most likely the mining ship will be destroyed and the rock will be taken by someone else. If you are in a squadron with other people the resources will be shared around and if able, help defend a rock that has been taken by someone else you will get some resources but not much.

You can extract the same resources as Asteroids but in a much bigger value.

The amount of Outposts that your faction hold in oppsition to the enemies affects how fast the resources are mined. The maximum is a 20% boost. It's called System Control Bonus and you can see your current bonus by opening the sector map and looking at the top right hand corner.

A Cylon Mining Ship
Add a photo to this gallery
Retrieved from "https://bsgo.fandom.com/wiki/Planetoid_Mining?oldid=12838"
Community content is available under CC-BY-SA unless otherwise noted.