Outposts are stationary battle stations which can be used in other star systems as long as there is sufficient activity within the system. It is marked by a symbol of a ship on the System Map, and by a red or blue circle on the sector map (if there is both a Colonial and a Cylon Outpost in a system, the circle will be half blue and half red).

Originally there was only one type of Outpost per faction, but following the release of Update 34 in March 2014, Outposts now come in three distinct versions: 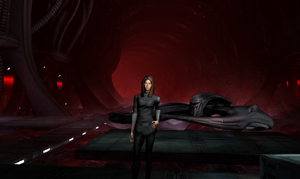 Cylon Outpost interior
Add a photo to this gallery

Activity in a system is determined by the oupost progress percent counter in the top left-hand corner of the screen. Outpost progress is increased by mining (either individually or through Mining Ships), killing NPCs (PVE),  kill other players (PVP), succesfully completing a freighter in Distress mission, successfully completing a Drone Incurion (Nexus) mission. Once the Outpost Progress reaches 90% (which should also be level 2 system control), an Outpost will automatically jump into the system. Note that the maximum value for outpost progress is 300%.

However, there is also an auto-drain per minute. As soon as outpost progress drops down below 90%, the Outpost will jump out/retreat from the system. Enemy outposts can be forced to leave the system upon successful destruction during battle. Please note, unsuccessful Freighter in Distress missions will subtract 15% from the outpost progress counter.

It is possible for both factions have their respective outposts in a single system. This is shown on the system map with a split color circle.

System control now ranges from level 0 to 10,with each level outline below:

By level 10, the system should have a fortified outpost bordered with 4 heavy sentry platforms surrounding it.

Introduced in Update 34 on 6 March 2014, these platforms were added to give additional firepower to Colonial and Cylon Outposts. They are immobible weapons platforms which will appear around the perimeter of Outposts based on the system control outlined above. The sentry platforms come in 3 distinct categories -

The Sentry Platorms, when they appear, will appear at equidistant points from the Outpost forming a perimeter around the Outpost. An Outpostcan have a maximum of 4 Sentry Platforms at any one time.

Outposts can be docked with by pilots for running maintenance for their ships and to restock supplies. The distance for docking is within 999 metres. Pilots who "die" during battle (i.e. be rescued during search and rescue operations) respawn inside an outpost, either in the system they were defeated in (if their faction has an outpost available in that system), or in the nearest system that has an outpost.

The following NPC can be found within the Outpost:

Pilots may choose to do the following by interacting with the NPC:

With the release of Game Update 47, should a player attempt top dock with an Outpost whilst in combat or in "threat", it will take 10 seconds for their ship to dock.

Each faction has several systems in which outposts cannot be established by the other side. This is to protect these regions of space from enemy P v P (Player Vs. Player) combat, and allow newer players more room to explore can gain the experience they need. It should be noted though that players from the opposing faction may enter these systems, but only a limited number at any one time.

Retrieved from "https://bsgo.fandom.com/wiki/Outposts?oldid=12488"
Community content is available under CC-BY-SA unless otherwise noted.