Number Two (also known as Leoben Conoy, or just Leoben) is a humanoid Cylon model. First encountered on Ragnar Anchorage by the crew of the Battlestar Galactica following the final Cylon attack on the Twelve Colonies, a Number Two called himself Leoben Conoy and said he was an arms dealer who had taken refuge on the station followng the Cylon attack. Isolated with (then) Commander Adama, Leoben was apparrently ill, with Adama guessing correctly it was radiation illness caused by the radiation surrounding the station. This radiation only effected Cylons. Revealed as a Cylon during conversation, Number Two exhibited abnormal strength levels as he attempted to kill Adama, but he was bludgeoned to death by Adama. Prior to his death, Leoben revealed to humanity that Cylons had ressurection technology as he would download into a new body.

Some time later, another Number Two was found to be hiding in the Colonial Fleet on the Gemenon Traveller. This Cylon was captured and interrogated by Kara "Starbuck" Thrace. During interrogation, this Number Two exhibited a philosophical and reilgious bent, delighting in mind games involving disorienting philosophical discourses that entwined truth with lies. This version of Number Two was eventually executed by order of President Laura Roslin. The encounter though saw the Number Twos become fascinated with Kara Thrace and her role in the future of humanity.

Number Twos like mind games, are physically the strongest of the humanoid Cylon models being able to snap handcuffs and toss people around like rag dolls. They are more interested in religious and philosophical mattters than fellow Cylons. They are adept at confusing their enemies by combining lies and truth in attempting to manipulate their opponents. They are also known to have displayed prescient ability. Number Twos are also the most cunning of the Cylon humanoid models.

In the game, you speak to Number Two/Leoben to:

Number Two/Leoben may be found in the CIC on the on the Basestar located in 242 Apollid. 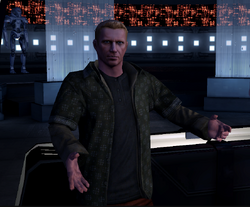 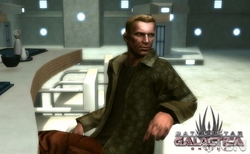 Add a photo to this gallery
Retrieved from "https://bsgo.fandom.com/wiki/Number_Two/Leoben?oldid=11035"
Community content is available under CC-BY-SA unless otherwise noted.