Number Six is a is a humanoid Cylon model. A number six is first encountered on Armistice Station (the diplomatic space station on the edge of Colonial space which was maintained as a neutral meeting point for humans and cylons, following the end of the First Cylon War) imediately prior to its destruction. This encounter was the first between humans and cylons since the end of that war. It was the harbinger of the final attack on the Twelve Colonies by the Cylons.

Another Number Six, pretending to be an employee of a computer corporation who were going to tender for Colonial defence contracts, had become involved in an intimate relationship with Dr Gaius Baltar on the Colonial capital planet of Caprica. Through her seduction of Baltar, this Six gained access to the Colonial defence computer mainframe and was able to implant a virus which was instrumental in shutting down most of the ships and defensive systems in the Colonial Fleet, thus enabling the successful destruction of the Twelve Colonies. She revealed her true nature to Dr Baltar just prior to the Cylon attack, shielding him from the blast of a nearby nuclear detonation which, whilst killing her body, saved Baltar's life. Upon downloading into a new body, this Number Six was revered as a hero by her fellow humanoid Cylons who took to calling her "Caprica Six" as a mark of their regard for her.

Other number sixes encountered include: Gina Inviere, who was a Cylon infiltrator onboard the Battlestar Pegasus; and Shelly Godfrey who tried to frame Gaius Baltar for sabotaging the Colonial defence computer mainframe immediately prior to the final Cylon attack.

Sixes tend to be seductive, infiltrators. They tend to be more individualistic than their fellow humanoid Cylon models, with different numnber sixes exhibiting differing hair styles, clothing styles and even interests. They do however show certain disdain for their given chores and dislike being treated as expendable. They are also extremely adaptable and effective. However they are more susceptible to the full gammut of human emotions than their fellow humanoid Cylon models. Along with the Number Eights, Sixes tend to be the most commonly encounterd humoid Cylons.

In the game you speak to Number Six/Caprica Six to:

Number Six/Caprica Six may be found in the CIC on the on the Basestar located in 242 Apollid. 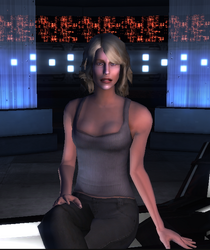 Add a photo to this gallery
Retrieved from "https://bsgo.fandom.com/wiki/Number_Six/Caprica_Six?oldid=11031"
Community content is available under CC-BY-SA unless otherwise noted.