Number Eight (also known as Sharon) is a humanoid Cylon model. Number Eights are one of the most commonly encountered humanoid cylons (along with the Number Sixes). Eights tend to be more affectionate and show greater concern for others than their fellow models. They also tend to be more naive and emotionally immature. This has lead them to be described as weak by others, despite the fact the Eights were overwhelmingly in favour of destruction of the Twelve Colonies. Eights have a greater propensity to forming emotional attachments than other humanoid Cylons, attachments that can see Eights become intensely loyal and break Cylon law and traditions to help humans. This leads some to believe they can be fickle, changing their loyalties to suit their desires. Despite being viewed as fragile, this can disguise their great strength and direction.

In the game, you speak to Number Eight/Sharon to:

Number Eight/Sharon may be found in: (a) the CIC on the on the Basestar located in 242 Apollid; and (b) any Cylon Outpost. 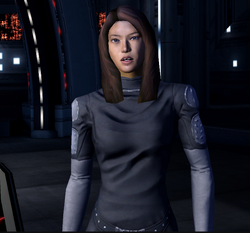 Number Eight/Sharon on an Outpost
Add a photo to this gallery
Retrieved from "https://bsgo.fandom.com/wiki/Number_Eight/Sharon?oldid=11033"
Community content is available under CC-BY-SA unless otherwise noted.