Mining is an integral part of Battlestar Galactica Online's gameplay. Mining is the means by which players extract Tylium, Titanium, and Water from the envoirment to use in ship upgrades, purchasing new equipment and ships, and completing daily asignments.

There are two types of mining:

There are 3 types of resources that can be mined from both asteroid, and planetoids.

Resouces can be identified by the use of a Mineral Analysis Module. When scanned, a planetoid or asteroid will change to one of 4 colors:

Asteroid Mining involves scouring systems for individual asteroids, scanning them with a mineral analysis module/cluster, and blasting them apart with mining cannon/s to retrieve the minerals inside. Asteroids can be found in every system, and come in a variety of sizes. The health, size, and amount of resources which are in the asteroids, depend completely on the threat level of the sector. Systems with a threat level of 20 tend to have larger, more abundant, mineral reserves, but players have to be wary of other players and hostile high level NPCs. Threat levels 1-10 are safer, but give less resources.

Once you are able to afford a secondary ship, it'll be a good idea to make one solely for the purpose of mining, and the other to be your primary combat vessel, as prospecting requires quite a few things in order to ease the process of mining, at the cost of combat-effectiveness. This means that if you're confined to only one ship alone, a Viper Mark II, if you're starting out with the Colonials, or a Cylon Raider , if you're starting out with the Cylons, you would have a rather difficult choice to make as to what kind of role and purpose you would want for yourself as well as your chosen vessel. Given the fact that the starter ships tend to be rather limited in space and functionality, it would be best to find a Wing to join with first, and rely on more experienced players/friends to help with resource gathering until you have sufficient resources to procure another ship.

It is recommended by some to mine asteroids with the use of an Escort, as its mining cannons deal more damage than those of Strikes, allowing the pilot to destroy the asteroid faster and save more time. Many players who mine with Lines however, may forgo the use of mining cannons and instead use regular cannons, as they mine faster, and allow for effective defensive capabilities should they be attacked by players or NPCs. However, mining with a strike makes players harder to see at distance and players may be able to outrun any attackers.

Asteroid mining, whilst it can lead to boredom, tends to be safer than planetoid mining (see below). This is because your mining efforts do not show up on anyone's sector map. All you need worry about is either being spotted by enemy on Dradis or visually.

Colonial Raptor mining water
Add a photo to this gallery

Planetoid Mining is the process of extracting large quantities of minerals (sometimes in the range of 50,000+) from the large "asteroids" (which are called "planetoids") that are found in most systems. Planetoids are easy to spot upon entering a system, as they are at least 15 times bigger than the largest asteroids. Because of this, planetoids are too large for a mining cannon/s to destroy and are instead mined via a Mining Ship. To mine a planetoids, it must first be scanned, which requires the Mineral Analysis Module (Colonial) or the Mineral Analysis Cluster (Cylons).

After scanning, if the planetoid has any resources, a menu will appear asking if you want to call in a Mining Ship. The cost of calling in the mining ship is 100 cubits. Upon selecting yes, a Colonial or Cylon Mining Ship (depending on your faction) will jump in, land on the planetoid and begin extracting resources. It is then up to the player to defend the mining ship until it is either: destroyed by NPC's; destroyed by other Players; or the Planetoid runs out of resources and breaks up. The mining ship will automatically extract resources from the planetoids and automatically place it into your hold regardless of what system you are in, and even if you are offline. When a planetoids does run out, it breaks apart, and will respawn in random shapes and sizes after a certain period of time. The resources may also vary greatly. Please note, when you first call in a mining ship, an NPC from the opposing faction will spawn nearby within seconds and attempt to destroy the mining ship. The spawning of an enemy NPC to attack the mining ship will continue at regular intervals until either the mining ship is destroyed, or leaves following the planetoids breaking up after running out of resources.

Further, players should realise that planetoid mining is inherently more dangerous than asteroid mining. When you call in a mining ship, the prescence of a mining ship in a system shows on the sector map for all players, both Colonial and Cylon alike.This is because the destruction of mining ships is part of a player's daily assignments (see Mining Disruption), so players from the opposing facfion will be looking for mining ships to destroy.

What some players do not realise is that planetoid mining is in the game as a method to encourge player v player combat. If you do not like this, it is recommended you stick to asteroid mining. 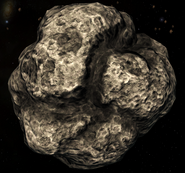 Colonial mining ship at work
Add a photo to this gallery

It should be noted following the deployment of Game Update 50, only the mining of planetoids by mining ships will be divided amongst the players in a squadron. Mining of asteroids will see all the resources obtained go to the player who mined them and no one else.

For more information, read this page.

1. The Advanced Cylon Raider or Advanced Viper Mk.II is also arguably the best mining ship for the Cylons or Colonials for a number of reasons:

Two upgraded mining guns and an upgraded asteroid scanner is generally the most efficient setup given the power costs and the need for two normal guns for defense.

Low level players should avoid planetoid mining in contested systems (i.e. systems opposition players can enter). This is because the Mining Disruption daily assignment requires oppostion players to destroy mining ships, and as mining ships show up on the Sector Map for both factions, you will attract opposition players with superior equipment looking to destroy your mining ship, which you will not be able to defend well. Asteroid mining might be a grind but it is safer, and you can gather water faster than by planetoid mining.

Retrieved from "https://bsgo.fandom.com/wiki/Mining?oldid=12870"
Community content is available under CC-BY-SA unless otherwise noted.