Due to the high level Colonial npcs in this system this is a good system for Cylon players to hunt. 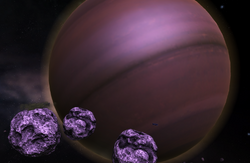 Marsamxett
Add a photo to this gallery

Only a maxium of 20 Cylon players may be in the system at any one time. Cylon Outposts will not spawn in the system.

Retrieved from "https://bsgo.fandom.com/wiki/Marsamxett?oldid=11920"
Community content is available under CC-BY-SA unless otherwise noted.