Line Ships or Lines as they are more commonly known, are the heavy battle cruiser equivalent in BSG Online. Designed to pack a maximum of punch offensively, they are designed as large scale ships designed to do maximum damage. Their cannons and missile launchers are bigger than strikes or escorts, a lone line ship can often decimate an escort ship with barely a scratch to it, whilst a squadron of line ships have beeen known to take out Outposts and even the Battlestar Pegasus or the Basestar in combat. They are susceptible to attack by strike ships though as their larger cannons do not have the accuracy to be able to hit strikes with as much effectiveness, and strikes may be able to get into a blind spot making hitting them even more difficult. 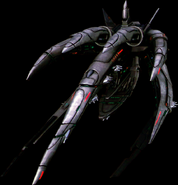 Retrieved from "https://bsgo.fandom.com/wiki/Line_Ships?oldid=10228"
Community content is available under CC-BY-SA unless otherwise noted.