The Liche is the second Multi role ship in the Cylon fleet (the first being the Cylon War Raider) and is an escort ship. The Liche is the second ship that costs merits to upgrade, and is the second ship to have every type of equipment slots equal except for weapons. The Liche has 6 weapons slots so its firepower is greater compared to other Escorts, making this a much yearned for ship. The Liche is the most popular Cylon escort ship. It is great for chase scenarios as well due to the side ways guns which can shoot even when you are being chased. Whilst not a specialty ship like the others of the escort class, the Liche is an allrounder in that it has 3 hull slots, 3 engine slots and 3 computer slots which gives the ship a greater versatility than other escorts.

"Recently discovered in a code-locked section of the 47 Tartalon base, the Liche appears to have been a further evolution of the design principles of the Spectre. Instead of focusing on electronic support and warfare, however, this fast and powerful ship is capable of being configured for a variety of tactical applications.

As a Multi-role attack ship, the Liche can be equipped with a more balanced selection of Hull, Engine, and Computer systems than other escorts."

The Liche comes pre-installed with the following systems: 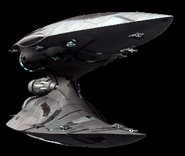 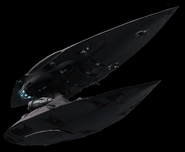 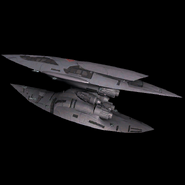 Retrieved from "https://bsgo.fandom.com/wiki/Liche?oldid=12451"
Community content is available under CC-BY-SA unless otherwise noted.