The Jotunn is one big daddy of a ship, and is the third of the Line Ships that Colonial players can pick upon reaching level 20, after the speedy Aesir and the powerful Command vessel, the Vanir. Although the buying cost is a hefty 2,000,000 Tylium, it's a worthwhile investment as the subsequent upgrade cost is only 60,000 Cubits. As a Heavy Assault ship, the Jotunn is the most heavily armored ship in the game on the Colonial side, and when upgraded, it can have over a whooping 8,000 Hull Points (If Hull plates are Level 10 or greater), enabling it to withstand almost any level of attack on itself, earning it the rightful title of a "Baby Battlestar". Due to the similarity of its shape, there is some belief that this ship may have been the predecessor of all Battlestars.The Jotunn is a very slow ship, in fact it is the slowest line ship available to Colonial pilots. This makes it vulnerable to fast moving strikes and other faster ships.

Recently, the model of the Jotunn has been updated, changing the shape of its massive engines to be even more massive. The gameplay is not changed, but many Colonial pilots have been using the Jotunn more often now, due to its badass look.

Its one draw back is that it has lower base power than the either the Aesir or the Gungnir.

"The largest abandoned ship class that the Colonial Fleet has so far managed to recover and return to service, the Jotunn's massive construction and capability to advance under the most withering fire has already earned it a reputation as a 'baby battlestar'.

As a Heavy Assault vessel, the Jotunn can be equipped with more hull systems than other line ships, further increasing its toughness and defensive capabilities."

The Jotunn is pre-installed with these systems: 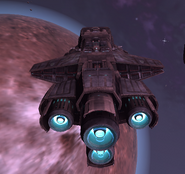 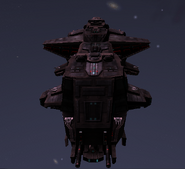 New model of the Jotunn (head on view)

Retrieved from "https://bsgo.fandom.com/wiki/Jotunn?oldid=12362"
Community content is available under CC-BY-SA unless otherwise noted.