The Hel is the command class line ship in the Cylon Fleet. It's main role is to provide electronic warfare and support. As a command ship, the Hel has more computer slots, a stronger emitter and firewall ratings than it's fellow line ship. It's effectiveness is limited however, as it has the most blind spots of all Cylon ships.

"Obviously intended for use as a battlefield command and control platform, the recovered Hel class hulls are honeycombed with data processing, sensor and emitter plexuses that rival the capabilities of a Basestar hybrid. As a Heavy Command vessel, the Hel can be equipped with more computer systems than other line ships, increasing its electronic warfare and support capabilities.

The Hel is pre-installed with the following systems: 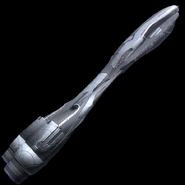 Retrieved from "https://bsgo.fandom.com/wiki/Hel?oldid=12474"
Community content is available under CC-BY-SA unless otherwise noted.