The Halberd is the fourth choice of Escort class ships a Colonial player can pick, after the speedy Scythe, the Command type Glaive, and the heavy set Maul.

It Is the only multi-role class in the escort ships. It may cost a hefty fee to buy but as a multi-role ship it is most certainly worth it. The Halberd is a popular Escort ship amongst veteran players (they are the only ones who can afford it) but it is an investment well made as it can fit into any Escort vs Strike/Escort/line situation. The Halberd is arguably the best escort ship. It's fast, and very good to destroy small ships (drones, raiders etc). The Halberd is the most popular escort ship for Colonials. It is great for chase scenarios as well due to the side ways guns which can shoot even when you are being chased. Whilst not a specialty ship like the others of the escort class, the Halberd is an all-rounder in that she has 3 hull slots, 3 engine slots and 3 computer slots which gives the ship a greater versatility.

"Recently discovered in a sealed hangar in the Delta Canopis base, the Halberd appears to have been a further evolution of the design principles of the Glaive. Instead of focusing on electronic support and warfare, however, this fast and powerful ship is capable of being configured for a variety of tactical applications.

As a Multi-role attack ship, the Halberd can be equipped with a more balanced selection of Hull, Engine and Computer systems than other escorts."

The Halberd is pre-installed with these systems: 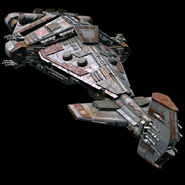 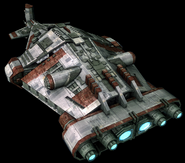 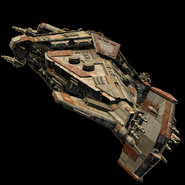 Retrieved from "https://bsgo.fandom.com/wiki/Halberd?oldid=12429"
Community content is available under CC-BY-SA unless otherwise noted.