The Gungnir is one of the rarest Lines one would see amongst level 20-30's. A very expensive ship, costing 250,000 cubits to purchase, as well as being the only multi-type line ship there is. Depending on what your edge is in fleet battles, the Gungnir can be used on all fronts. A support command style ship, an all out assault ship, or as an interceptor, the Gungnir is the jack of all trades of the Colonial line ships due to its balance of having 3 computer slots, 3 hull slots and 3 engine slots to go along with its 8 weapons slots. This versatility make the Gungnir the preferred line ship of choice for many Colonial pilots.

"Only a handful of Gungnir class line ships have been recovered by Colonial forces, and all have suffered heavy damage from what appears to have been the last major battle fought in the sector before it was abandoned. Although they require massive investment to bring back into service, these formidable warships are capable of being configured for a variety of tactical applications and have few weaknesses.

As a Multi-role heavy attack vessel, the Gungnir can be equipped with a more balanced selection of hull, engine and computer systems than other line ships."

The Gungnir is pre-installed with these systems: 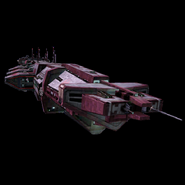 Retrieved from "https://bsgo.fandom.com/wiki/Gungnir?oldid=12367"
Community content is available under CC-BY-SA unless otherwise noted.