The Glaive is the second of the Escort class ships after the Scythe, and before the lumbering Maul, that a Colonial Player can pick as their level 10 Graduation gift. Unlike the Maul, the Glaive requires cubits to purchase, going at 60,000 Cubits, which shouldn't be too difficult to acquire (just go mining for Water to sell), and the return benefits are definitely worth every cubit. As a Command vessel, the Glaive has the largest allotment of Computer Slots (5) which, when coupled with strategically selected advanced components and an impressive array of weaponry, will give any fleet a tremendous tactical advantage against the Cylons. Although nowhere near as fast as a Scythe or as heavily armored as a Maul, the Glaive holds its own in terms of firepower which is placed all around its circular head and along the sides, and with the cannons on its head able to swivel around to fire behind it, giving it an almost 360 degree firing arc, it is one of the few Escorts that has almost no blind spots. It also has 6 weapons slots, rather than the standard 4, giving it the ability to shred through large numbers of strike craft.  Since it is a Command vessel, it is also capable of taking out large numbers of unprotected enemy vessels with a well-timed activation of its computers, the Glaive pilot can then fire away at immobilized Cylons, or protect itself and make a getaway, or boost their allies nearby and enable a swift end of the enemies. Due to all of its relatively more advanced design, this ship can go toe-to-toe with ships larger than itself, from other Escorts, to even larger Line Ships.

Glaive pilots have to be wary of some glaring issues, such as the fact that all of its weapons other than the two on the head, are attached to the top of the ship, leaving it with a relatively unprotected underside. However, the new "rolling" mechanic (activated by pressing Q or E when using the Advanced Flight Controls) in flight can keep this area safe.  Due to its slower turn rate, fast moving Strikes like the Cylon Raider or War Raider, or even a well-piloted Heavy Raider can slip in behind the Glaive, and fire at its narrow engine blind spot, unleashing withering fire upon the vessel. Furthermore, due to its slower speed, Glaives can't keep up or get away from faster Interceptors and will be forced to engage against the faster foe, which can be bad if the Interceptor is being backed up by slower moving but more powerful friends. As such, Command Vessels should always hold back from directly engaging and rely more on their allies to do the fighting while they (the Command ships) assist by boosting their friends or weakening the enemies from a safe distance. A small pair of Strikes should always be on hand to protect the Command Vessels from enemy Strikes or Interceptors.

Glaives also have the highest power and power recharge rates of any escort class ship, thus giving it an edge in how long it can keep firing any missiles, or using its computers or other energy using equipment.

Despite the fact that it isn't as fast as an Interceptor, or as heavily armored as an Assault ship, the Glaive is an important and invaluable asset in a fleet, and is the most suitable vessel for players who are good at stepping back and observing the battle as it unfolds, and as it was aptly named, operate as a Command vessel, directing allies and assisting them through electronic support. As it has enough weapons, it can hold its own if forced to engage, as long as its pilot maintains a steady mind and clear head, they will prevail.

"More advanced than the other two abandoned escort classes reclaimed by the Colonial Fleet, the Glaive is a compact, powerful design incorporating extensive electronic suites and computer hardware. Only a small number have been discovered, drifting derelict in space near the wreckage of a small asteroid base.

As a Command ship, the Glaive can be equipped with more computer systems than other escorts, increasing its electronic warfare and support capabilities.

The Glaive is pre-installed with these systems: 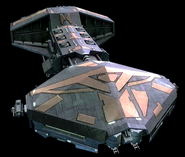 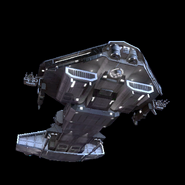 Retrieved from "https://bsgo.fandom.com/wiki/Glaive?oldid=12357"
Community content is available under CC-BY-SA unless otherwise noted.