Galen Tyrol is a Senior Chief Petty Officer serving onboard the Battlestar Galactica. Having joined the Colonial Fleet at the age of 18, Chief Tyrol has worked on numerous ships in the fleet, including a number of Battlestars before coming under the command of William Adama. Tyrol was serving under Adama's command on the Galactica at the time of the destruction of the Twelve Colonies. He is in charge of the maintenance of all the ships on board the Galactica and is the ship's highest ranking NCO.

The Galactica's unpretentious deck chief always stands up for the little guy especially if that means safeguarding the welfare of his enlisted crew.

Galen was previously found on the Delta Canopis Base but following a game update in March-April 2014, he may be found working on the door in CIC of the the Battlestar Galactica.

In the game you speak to Galen Tyrol to:

Unknown to everyone including Galen Tyrol himself, at the point in time the game is set (i.e. during Season 2 of Battlestar Galactica), Tyrol is actually a Cylon and a member of the Final Five. 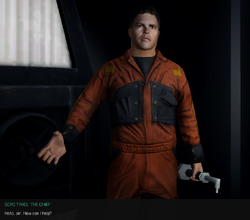 Chief Tyrol on the Galactica (current) 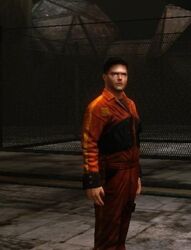 Chief Tyrol at the Delta Canopis base (no longer current)
Add a photo to this gallery
Retrieved from "https://bsgo.fandom.com/wiki/Galen_Tyrol?oldid=11037"
Community content is available under CC-BY-SA unless otherwise noted.