A Freighter is an NPC that exists in the game. These ships are unarmed transports that will not attack you, but they are usually guarded by a bevy of NPCs. The level and types of the NPCs will vary depending on the type of freighter. Of particular note, the NPCs will follow behind the freighter, they do not patrol in front of the freighter. Destroying enemy freighters are a mission among the daily assignments you are assigned. If you're past level 20, this requires you to kill four freighters. Killing a freighter also counts towards your Intercept Enemy Patrols assignment, and thus also to the Supply Allocation assignment.

Further, the Freighter in Distress Dynamic Mission  (often referred to as a FID) requires you to either: (a) Defend a friendly freighters for 10 minutes from attacking enemy NPCs/players whilst they fix their FTL drive; or (b) Destroy an enemy freighter in 10 minutes before it repairs its FTL drive. Completeing these missions counts towards completing your Regional Combat Patrol (RCP)  and RCP - Strategic Victory daily assignments.

Freighters act as mobile spawn points for the NPCs that defend it. If you put together a wolfpack of ships to take out the initial wave of NPCs, then the continual respawn of NPCs generates a flow of materials and income to each of you. In doing this, you never kill the freighter; you just keep following it and waiting for the NPCs to respawn.

Given that the NPCs patrol behind a freighter, the safest point of approach to attack a freighter is from dead in front of it. Using this attack vector, freighters are particularly vulnerable to long range missile attacks. The guarding NPCs will never respond if you stay well in front of the freighter. It will take a few passes, but you will destroy the freighter.

This freighter is level 8 with 1,000 hit points. It is the easiest of the freighters to kill. The NPCs that follow it are usually level 10 or lower and are also the easiest. Only NPC Strike Ships will be guarding the freighter.

This freighter is level 14 with 1,500 hit points. It is escorted by a number of Strike Ships and Escort Ships, usually in the level 11 to 14 range. Destroying it is worth 600 experience points.

This freighter is level 20 with 2,250 hull points. It is escorted by strike ships and line ships, usually in the level 16-19 range (strikes are usually level 19, lines are level 16). Destroying it is worth 1000 experience. 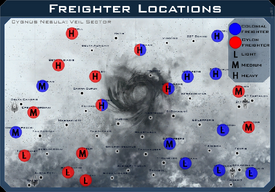 Map showing location of freighters
Add a photo to this gallery

When a freighter dies[edit | edit source]

When a freighter dies, the NPCs patrolling behind it will jump out of the system, effectively disappearing a relatively short time after the freighter is killed. Freighters re-spawn 10 minutes after they are destroyed.

Retrieved from "https://bsgo.fandom.com/wiki/Freighter?oldid=12013"
Community content is available under CC-BY-SA unless otherwise noted.