The Fenrir is the third interceptor in the Cylon fleet. It is the fastest Line ship and it has now an advanced version so the systems can be even better. It has the highest avoidance and speed of all the lines due to its ability of being able to run 5 rcs ducts or boosters in its engine slots.

The turning rate is highest of all lines but it is still low (especially compared to escorts or strikes) so it's recommended to get turning rate engine systems and skills as high as possible. The Fenrir has the more energy than a Hel or Jormung, and is equal to a Nidhogg.  Therefore, the Fenrir is commonly used as a 'Missile Boat', meaning that the Fenrir pilot equips missile launchers on all of his/her weapon slots.

The Fenrir also comes with more weapons slots than most other unadvanced Lines, 8 instead of the usual 6.

"Incredibly swift for a ship of its size, the recovered Fenrir hulls have proved to be among the most complex and advanced designs left behind by the mysterious Cylons who abandoned this sector at some point in the past. Returning them to active service requires a massive investment of time and resources, but the Fenrir's combination of speed and firepower is highly effective.

As a heavy interceptor, the Fenrir can be equipped with more engine systems than other line ships, increasing its already impressive performance."

The Fenrir is pre-installed with the following systems: 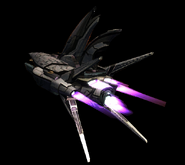 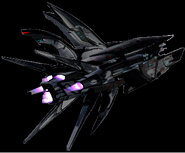 Retrieved from "https://bsgo.fandom.com/wiki/Fenrir?oldid=12452"
Community content is available under CC-BY-SA unless otherwise noted.