Drones are unaligned, NPC ships that appear in certain star systems in the game. Patrolling certain points in a star system, they will attack both Colonial and Cylon ships that come within weapons range. Some are equipped solely with cannons,others with canons and missile launchers. They come in differing types (usually Seeker, Sentry, Guard and Hunter) and in various levels (namely 5, 9, 10, 14, 15, 19, 20, 25 and 29). The higher the levels of the drone, the more hull points and power they will have.

When targeted, drones will appear outlined in yellow on players' DRADIS, and the drones bullets and missiles appear yellow on screen when fired.

Destruction of a set number of drones is a Daily Assignment for players. They were created by the same group that created the weapons platforms.

This is a small drone found in the safer levels of the game. This NPC (non-player character) uses mainly missiles to damage others. It is a drone malfunctioning and is of unknown origin. It will attack both Colonial and Cylon players.

This is one of the weakest NPCs in all of BSGO.

Failing Seeker Drone
Add a photo to this gallery

More durable drone, and more aggressive than the lower level ones.

Has more hull points than the seeker of the same level.

Has more hull and more power than the level 10 drones. Armed with cannons and one missile launcher.

Weaker than the level 14 drones, these seem to be designedf or reconnaisance work. 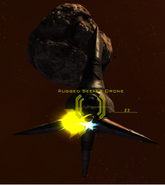 Rugged Seeker Drone
Add a photo to this gallery

Level 19 Rugged Hunter Drone
Add a photo to this gallery

Have lower hull points and power than the level 19 rugged hunter and guard drones. 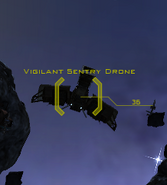 Vigilant Seeker Drone
Add a photo to this gallery

The highest level regular drone in the game. Faster and more agressive than the Vigilant Seeker drones. Come equipped with cannons and 1 missile launcher. May be found in parts of Asterian, 32 Serpentos and Kryphon.

The highest level regular drone in the game. Slower than some but made up for in its greated hull points and firepower. May be found in 32 Serpentos and Kryphon.

Description: "Pilots, urgent message from our intelligence! We encountered an unknown enemy craft! See recon picture below, please excuse the quality. ...Important: Proceed with extreme caution! This enemy - call sign: "Revenant" - seems to be very dangerous, try not to approach him alone!"

This unique drone is a "rogue" Cylon Raider which will attack both Colonial and Cylon players. It has cannons and nuclear missiles (which do approximately 500 damage per missile), the only npc ship which has nuclear weapons of any sort. This ship spawns randomly in a number of different systems, but only in one system at a time. Destroying it counts towards the Drone Clearance daily assignment and it may reward players with rare items in its loot drop.

Here are the various type of Drone ships.

Retrieved from "https://bsgo.fandom.com/wiki/Drones?oldid=11646"
Community content is available under CC-BY-SA unless otherwise noted.