Delta Canopis is a system in the Veil Sector which is permanently under the control of the Colonial Fleet. With a threat level of 0 for Colonial players (it is 256 for Cylon players), this system only has Colonial npc ships in it, there are no Cylon npc ships nor drones in the system. Colonial players wil not be attacked in this system.

The asteroids in this system may contain tylium and titanium. Some of the asteroids are located behind the moon on which the base is located.

You can fly completely around the moon in this system.

The debris fields do not contain any salvage containers.

There is no 3D map of this system currently available.

No Freighter in Distress Dynamic Mission will spawn in this system. 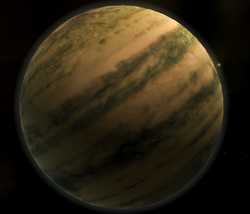 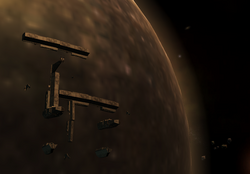 Colonial Base on the moon in the Delta Canopis system

Carrier Drydock
Add a photo to this gallery

Cylon players are unable to enter the system. Cylon Outposts will not spawn in the system. An unlimited number of Brimirs may be in this system at any one time.

Retrieved from "https://bsgo.fandom.com/wiki/Delta_Canopis?oldid=11898"
Community content is available under CC-BY-SA unless otherwise noted.