The Cylon War Raider is a multi-role ship that takes the place of the the basic raider more commonly in the BSGO universe amongst high level players. The War Raider comes with 4 Weapon slots  as well as 3 engine slots, 3 computer slots  and 3 hull slots. The multi-roles are the only types of ship (with the exception of the Carrier class and the Stealth Ships) that cost merits to upgrade.  Surprisingly, the boost speed for the War Raider was faster than the Cylon Raider, 85 compared to the Interceptor class which was only 75. This may have been a mistake made by the developers, or a deliberate move as the War Raider is much more valuable. Since game update 41, this is no longer the case, as the Cylon Raider has seen an increase to its boost and flank speeds.

The War Raider is mostly used for total combat, as its manuverability is as good as the Cylon Raider. It is the most common Strike seen in fleet battles, being fast enough to chase down missiles. Many Colonial Line pilots fear the War Raider's extreme lethality, and it is not unusual to see them jump away as soon as they see you in this small but intimidating Strike.

The Cylon War Raider has few weaknesses, as its Hull points can go up to 1,000, Boost speeds reaching over 100, and its computer warfare can rival those of an un-advanced Heavy Raider.

"With the Cylon fleet out off from its usual supply lines, the Cylon War Raiders in storage aboard the Basestars have been reactivated. Although the predecessor to the modern Raider is less efficient and more expensive to maintain, it also offers more tactical flexibility and its performance remains impressive.

As a Multi-role fighter, the Cylon War Raider can be equipped with a more balanced selection of hull, engine and computer systems than other strike craft."

The Cylon War Raider is pre-installed with the following systems: 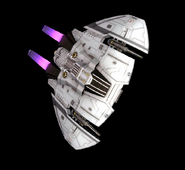 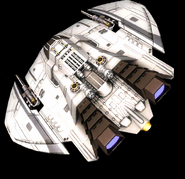 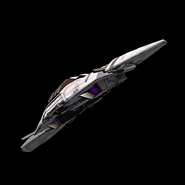 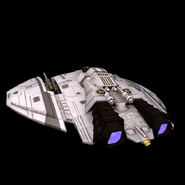 Retrieved from "https://bsgo.fandom.com/wiki/Cylon_War_Raider?oldid=12405"
Community content is available under CC-BY-SA unless otherwise noted.