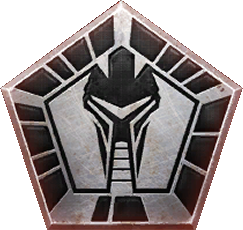 The Cylons are robotic beings that were created by man, originally to serve as solidiers but then workers. They eventually rebelled against their creators, leading to the First Cylon War. This war lasted for 12 and a half years until an armistice was signed and peace was declared. The Cylons retreated from the Colonies and broke off all contact with man for 40 years. They eventually returned and in a mass, sneak attack destroyed the Twele Colonies and much of mankind.

They are robotic beings that are bent on the destruction of the surviving Colonials. They are referred to by the humans and sometimes by in game Cylon players as toasters. In game all Cylon ships appear red on the DRADIS.

Following the detrsuction of the Twelve Colonies, it was revealed that the Cylons had evolved and there were now Cylon models that appeared human. It is believed by the humans that these human Cylon models were involved in managing to sabotage Colonial defences that enabled the Cylon attack to be such a success. Since then human Cylons have been discovered in the Colonial Fleet attempting sabotage. There are only Twelve human Cylon models.

The known human Cylon models are -

It should be noted, in game, players cannot be human Cylons, and the only human Cylons are npcs, namely: Number One/Cavil, Naumber Two/Leoben, Number Six/Caprica Six, and Number Eight/Sharon.

The Final Cylons are the group of centurions that inhabited the unexplored outer space of the Twelve Colonies.

Even though they are known collectively as Cylons, there are different types of Centurions and 8 Humanoid Models with own characteristics, Cylon legend tells about 5 additional models known as "The Final Five" however these models have been lost for centuries. These differences can cause conflict at times for the Cylons as a whole.

Retrieved from "https://bsgo.fandom.com/wiki/Cylon?oldid=11593"
Community content is available under CC-BY-SA unless otherwise noted.