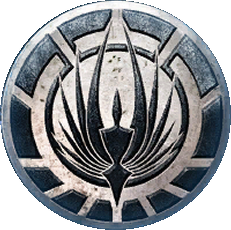 Colonial is the name given to the human beings who inhabited the Twelve Colonies of Kobol, namely: Aerilon, Aquaria, Canceron, Caprica, Gemenon, Leonis, Libran, Picon, Sagittaron, Scorpia, Tauron and Virgon. Whilst the colonies were mainly independent, they formed a centralized government to fight the Cylons in the First Cylon War.

The Colonies were destroyed by the Cylons in the attack depicted in the TV mini-series. Even though they are known collectively as Colonials, each are very different depending on their homeworld. Each Colony has their own customs and beliefs. These differences can cause conflict at times for the colonials as a whole.

Now the Colonials are the survivors of the Twelve Colonies who are in a fleet guarded by the Battlestar Galactica as they search for the lost 13th Colony of Kobol, Earth.

Colonial describes the human faction in Battlestar Gallactica Online. Playing as a colonial and targetting friendly ships causes them to be outlined in blue.

Retrieved from "https://bsgo.fandom.com/wiki/Colonial?oldid=8982"
Community content is available under CC-BY-SA unless otherwise noted.