Captain Lee Adama (call sign "Apollo") is a Captain serving on board the Battlestar Galactica as a Viper pilot and as Commander, Air Group (or CAG). Eldest son of Carolynne and William Adama, Lee entered service with the Colonial Fleet straight out of college. Proving himself an able officer and pilot, Lee rose to the rank of Captain and was regarded as an accomplished Viper pilot and an officer well on the way to one day commanding a Battlestar. He became estranged from his Father following the death of his younger brother Zak in his first Viper mission after graduating flight school, where his brother had been under the tutelege of then Lieutenant Kara "Starbuck" Thrace, whom Zak was also seeing romantically, and who had (unknown to anyone but Kara) given Zak a passing grade despite failing basic flight. Lee achieved his rank and reputation on his own merit and without his Father's influence. On the day of the final Cylon attack on the Twelve Colonies, Lee Adama was onboard the Battlestar Galactica as a guest of honour taking part in her de-commissioning ceremony. Following the death of the Galactica's CAG, Major Jackson "Ripper" Spencer in the attack on the Twelve Colonies, Lee was the senior pilot on board and joined the Galactica's crew and was apppointed the new CAG.

In the game you speak to Lee Adama to:

Captain Adama may be found in the CIC on the Battlestar Galactica. 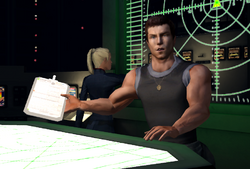 Add a photo to this gallery
Retrieved from "https://bsgo.fandom.com/wiki/Captain_Lee_Adama?oldid=8997"
Community content is available under CC-BY-SA unless otherwise noted.