Captain Kara Thrace (call sign "Starbuck") is a pilot serving on board the Battlestar Galactica. Daughter of Dreilide and Socrata Thrace, Kara followed in her Mother's footsteps by joining the Colonial Fleet after a knee injury put an end to her dreams of being a professional pyramid player. Finding the military life more accepting than at home, where she was an abused child, Kara dsiplayed an aptitude for flying that saw her become the first member of her family to become a commissioned officer in the Colonial Fleet when she was made a Lieutenant. Her Father having walked out on her when she was a child, Kara became estranged from her Mother breaking off all contact not long after her promotion.

Due to her aptitude, Kara became a flight instructor where she met Zak Adama. Even though Zak was one of her students, Kara became romantically involved with Zak. It was during this period where she first met and developed a close bond with Zak's older brother Lee Adama. Unfortunately, Kara's relationship with Zak did not last as she gave Zak a passing grade even though he hadactually failed  Basic Flight. This had tragic consequences as Zak died soon after on his first Viper mission.

Following Zak's death, Kara met then Commander William Adama, who upon seeing her natural ability as a pilot brough Kara under his command. At the time of the final Cylon attack on the Twelve Colonies, Kara was serving on board the Battlestar Galactica as a Viper pilot and was reputedly their "top gun" . Kara was promoted to the rank of Captain by Admiral Cain during her time on the Battlestar Pegasus.

In the game you speak to Kara Thrace to:

Kara Thrace may be found in the CIC on the Battlestar Galactica. 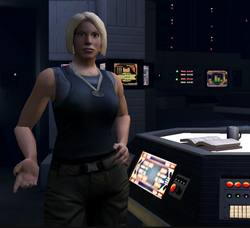 Add a photo to this gallery
Retrieved from "https://bsgo.fandom.com/wiki/Captain_Kara_Thrace?oldid=11036"
Community content is available under CC-BY-SA unless otherwise noted.