Calibaan is a star system in the Veil sector. Located just on the Cylon side of the sector map, this system has a threat level of 20. It contains at least 6 planetoids for mining, Colonial freighter, Cylon freighter, and two heavy weapons platforms. You will find the following Colonial npc ships here: Maul (Level 17), and Glaive (Level 20). You will find the following Cylon npc ships here: Cylon Raider (Level 19), Marauder (Level 19), Wraith (Level 17), and Spectre (Level 20).

This is also one of the systems that Revenant may appear in, usually at F7 on the 2D map. Otherwise there are not usually any Drones (excluding those that are part of a Drone Incursion Dynamic Mission) in this system. 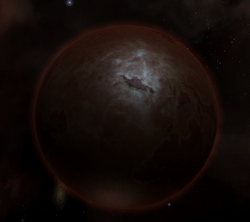 Calibaan star system
Add a photo to this gallery

Retrieved from "https://bsgo.fandom.com/wiki/Calibaan?oldid=11892"
Community content is available under CC-BY-SA unless otherwise noted.