Beta Pleiadis is a star system in the Veil Sector. Located on the Colonial side of the sector map, this system contains a number of Cylon npc ships including: Banshee (Level 17), Spectre (Level 17), Wraith (Level 17), Fenrir (Level 18), Hel (Level 18), and a Jormung (Level 18).

This system does not normally contain any Colonial npc ships.

There are also some Level 19 Rugged Hunter drones and Rugged Guard Drones near the heavy weapons platform.

Asteroids in this system may contain titanium, tylium or water.

Prior to game Update 51, it was felt that this system could be a good one to visit by Colonial players seeking npc kills without being harrassed by Cylons, or a good place to mine due to the difficulty most strike ships used to have making the FTL jump from Delta Aurican to this system. With the changes in the sectoir map with Update 51, it is now possioble for all strikes to FTL jump from Delta Aurican to this system. Even allowing for the change, this system is not as frequented a system as others (e.g. Calibaan or Hatir).

A hard level Freighter in Distress Dynamic Mission will spawn in this system from time to time. 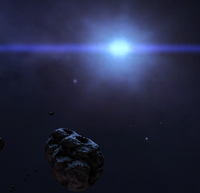 Beta Pleiadis star system
Add a photo to this gallery

Retrieved from "https://bsgo.fandom.com/wiki/Beta_Pleiadis?oldid=11890"
Community content is available under CC-BY-SA unless otherwise noted.