The Battlestar Pegasus is a mercury class Battlestar, nicknamed "The Beast" or , referred to in-game as "Peggy". It is a Colonial capital ship that can be found in the Delta Canopis system. It is normally stationed there as it is assigned to guard the Delta Canopis Base. This ship is the most powerful ship in the Colonial fleet with more firepower, hull points, and armor than any other ship on the Colonial side, making it a deadly opponent for any Cylon. The only ship can that go toe to toe with the Battlestar Pegasus is the Cylon Basestar. Like the Cylon Basestar in 47 Tartalon, players may rent and use the ship for up to one hour, or until they are destroyed (which ever is sooner), in exchange for a number of merits. This is done by talking to Admiral Adama in the Galactica CIC.

It should be noted that while this is the toughest ship in the Colonial fleet, it is advisable to travel with other ships as support as the Pegasus is not invulnerable andf can be overwhelmed by multiple ships.

Update 56 saw some further changes to this ship. It reversed the reduction in Hull Points from Update 55.5, and also saw some changes to its point defence weaponry. Also it saw an increase in the rental price.

This ship cannot be upgraded/advanced.

In the series Rear Admiral Helena Cain commanded the Pegasus until she was killed shortly after the attack on the Cylon Resurrection Ship.

"The backbone of the Colonial Fleet, Battlestars combine the roles of Battleships and Carriers. Pegasus is an example of the modern Mercury class, the largest and most powerful Battlestars ever constructed."

The Battlestar Pegasus is pre-installed with these Level 15 systems: 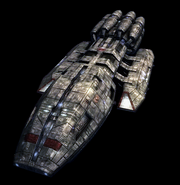 Add a photo to this gallery
Retrieved from "https://bsgo.fandom.com/wiki/Battlestar_Pegasus?oldid=11877"
Community content is available under CC-BY-SA unless otherwise noted.