The Basestar located in the 242 Apollid star system (referred to as Basestar (242) to differentiate it from the Basestar located in 47 Tartalon) is the flagship of the Cylon fleet. Designed after the First Cylon War, and designed to be a command and control ship for the Cylons, Basestars rely on numerous missile launchers combined with their Cylon Raiders for both attack and defence. A Basestar may be considered more lightly armed than a Colonial Battlestar as a Basestar relies on its Raiders to swarm any enemies.

Due to the organic components used in its constructions, a Basestar is able to heal itself given time, leaving it appearing like it has never been damaged if given sufficent time.

Following the events in the introductory mission to the game, the Basestar in 242 Apollid is permanently located there with the rest of the Cylon fleet.

The Combat Information Centre, or CIC, is the in-game interface where Cylon players may interact with Number One/Cavil, Number Two/Leoben, Number Six/Caprica Six, and/or Number Eight/Sharon to: get new daily assignments; turn in daily assignments; purchase/upgrade ships; purchase items; do the game's tutorial missions; and sell water. The other characters in the CIC players are unable to interact with.

Unlike the Basestar stationed in the 47 Tartalon star system, the Basestar (242) is not available for use by players. Following the events in the game's introductory mission, the Basestar (like the rest of the ships of the Cylon fleet) has a high power loss and is unable to use it's FTL systems or drives. 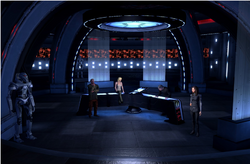