The Banshee is the interceptor Escort-class ship for the Cylon faction. It costs only 600,000 tylium (60,000 Cubits / 300,000 water in exchange). It's sleek, and streamline design makes it a rather difficult target to hit, especially from Line ships, despite their greater firepower, this smaller Escort ship is maneuverable and swift enough to get under a Line's defenses and whittle away at its foes. Even though the Banshee has blind spots much like other large ships, which a professional pilot of a Strike Ship can exploit, it is flexible and has a turn rate that's sharp enough to almost be able to match a Strike craft's, ensuring any Strike that wants to tangle with a Banshee isn't going to fly away unharmed. As the Banshee is the interceptor class of the Escorts, it only has 2 computer slots and 2 hull slots as most of its space is taken up by the 4 engine slots. Therefore it is not a choice for those who prefer tinkering with electronic warfare, or those who like to take on 3 opponents at once. If any opposing pilot has high-level weaponry, they can easily rip the hull off the Banshee. If you have not advanced your Banshee yet, it is best not to fly alone, perhaps with another Wraith, Spectre, Liche or even an experienced Strike pilot will ensure your survival.

However, thanks to its 4 engine slots, it has speed that can match a Strike, therefore it can dive straight into battle with an enemy Line or Escort and escape mostly unharmed.

A Banshee pilot has to be quick thinking and be able to strategize as well as navigate about in a battle quickly in order to fully utilize the ships speed and maneuverability to its fullest potential. They must also be cautious not to sustain too much damage due to the ships weak armor, lower hit points (compared to other escorts) and lack of computer systems. However, with good reflexes and command ability, the Banshee is an invaluable asset to any fleet. Just treat your Banshee with love and respect.

The Banshee can also serve a rather vital role in Outpost fights; it has access to a unique cannon, the Capital Blaster AC-42. It is only able to target Capital-class targets like outposts and their defense platforms, enemy Carriers and the Battlestar if it gets rented out, but it starts at 55 DPS (damage per second) (almost double the DPS of most maximum level cannons of all standard ships) and when maxed goes to 81 DPS, has an Armor Piercing of 60, an optimal range of 1,450 metres and a minimum range of 500 metre. It does have a reduced firing arc of only 90 degrees, so getting more than 2 on one target might be tricky, but you'll still be taking down the capital's health like no other ship type on the field.

"The first of three abandoned escort designs that the Cylon Fleet has so far managed to recover and return to active status. The banshee is a fast attack ship built for speed and maneuverability. Capable of supporting friendly strike craft or rapid response to enemy attacks.

As an interceptor, the Banshee can be equipped with more engine systems than other escorts, increasing its already impressive performance."

The Banshee comes pre-installed with the following systems: 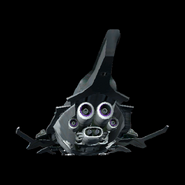 Retrieved from "https://bsgo.fandom.com/wiki/Banshee?oldid=12855"
Community content is available under CC-BY-SA unless otherwise noted.