The Advanced Viper Mark II is upgraded from the standard version for 30,000 Cubits. This can be done by talking to Galen Tyrol in the Galactica's CIC or by talking to the Outpost Quartermaster. This ship is seen less often in game piloted by Colonial players as many opt for the more flexible Viper Mark VII.

"A standard Viper MK II that has been stripped, rebuilt and finely tuned under the supervision of Chief Tyrol. Lightweight modern composites strengthen the hull, while customized engine management and fire control components push performance to the limit.

The Advanced Viper's hull is stronger and more durable than the standard version, and it can mount additional weapon and engine systems." 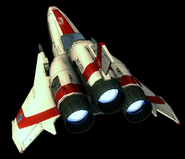 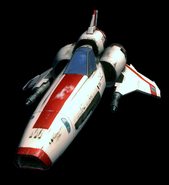 Retrieved from "https://bsgo.fandom.com/wiki/Advanced_Viper_Mark_II?oldid=12339"
Community content is available under CC-BY-SA unless otherwise noted.