The Advanced Brimir is the upgraded version of the Brimir. It is a carrier ship for the Colonial faction. A Brimir is upgraded from the standard version for 250,000 Cubits and 50,000 Merits. The player must be at least a level of 40. This can be done by talking to Galen Tyrol in the Galactica CIC or to the Quartermaster at any Colonial Outpost.

In addition to providing a mobile docking, respawn and repair point for up to 9 player-owned strike ships in the same squadron as the carrier ship, the Advanced carrier can also enter an immobile "Outpost Mode" which allows any member of the carrier's faction to FTL onto it's location. While being a "fortress" the carrier gains an armor bonus and hull regeneration bonus but is unable to FTL or gain velocity and receives a 50% penalty to rotation.

Players who already owned a Brimir at the time that game update 42 was deployed received the advanced carrier for free.

"Discovery of the derelict shipyards near Delta Canopis has allowed the construction of the Brimir class carrier. The carrier is a support and logistics vessel that allows strike ships to coordinate attacks and quickly repair and refit away from an outpost." 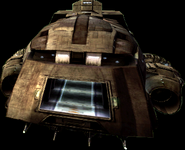 Retrieved from "https://bsgo.fandom.com/wiki/Advanced_Brimir?oldid=12160"
Community content is available under CC-BY-SA unless otherwise noted.