Admiral William "Bill" Adama is the Admiral of the Colonial fleet and commanding officer of the Battlestar Galactica. Son of Joseph and Evelyn Adama, William Adama (call sign "Husker") joined the Colonial fleet during the First Cylon War where he was assigned to the Battlestar Galactica as a pilot. Over the years (and despite leaving the service for a time),William Adama rose to the rank of Commander when he was appointed as the commanding officer of the Battlestar Valkyrie. Due to a botched reconnaisance mission into Cylon territory three years before the destruction of the Twelve Colonies, Adama was transferred to the ageing Battlestar Galactica. On the day of the final Cylon attack on the Twelve Colonies, the Galactrica was undergoing her decomissioning cermony which was to turn her into a museum of the First Cylon War.

Adama, at the urging of President Laura Roslin, organised a fleet of ships that survived the Cylon attack and fled the Twelve Colonies. After encountering the Battlestar Pegasus, and the eventual death of her commander, Admiral Helena Cain, Williama Adama was promoted to the rank of Admiral.

Admiral Adama is an experienced, pragmatic leader who does not stand on ceremony. Above all, he considers his crew to be his family. He is the father of Captain Lee "Apollo" Adama and of the (late) Zak Adama.

In the game, you speak to Admiral Adama to:

Admiral Adama may be found in the CIC on the Battlestar Galactica. 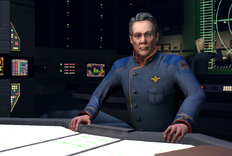 Admiral Adama in the CIC 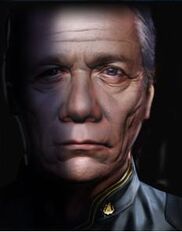 Add a photo to this gallery
Retrieved from "https://bsgo.fandom.com/wiki/Admiral_Adama?oldid=8998"
Community content is available under CC-BY-SA unless otherwise noted.